- July 24, 2020
This is an odd post for me, considering it’s a ballpoint pen review. Other than using gel pens or pencils at work (I work in a doctor’s office with only cheap copy paper to write on), it’s fountain pens all the way for me. I use them for journaling, for notes, for grocery lists, for everything! So color me surprised when I saw a post on Facebook from Leuchtturm announcing a new product: the Drehgriffel ballpoint pen. 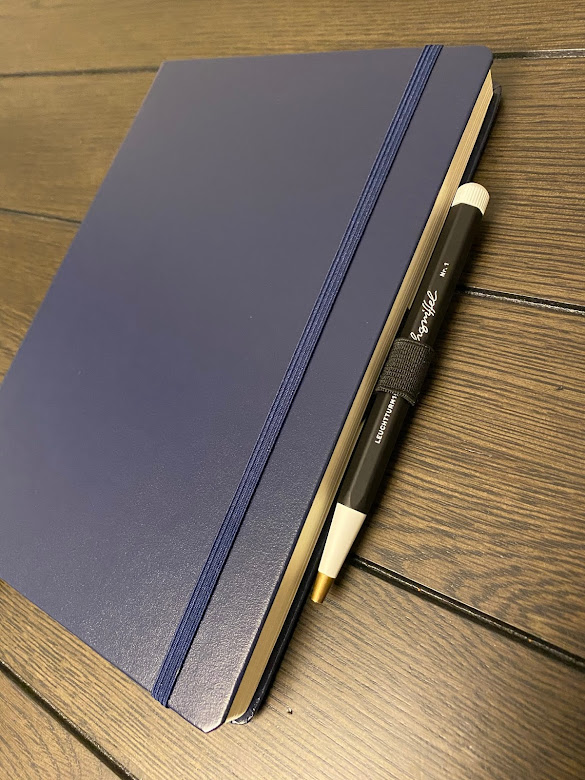 Even though I pretty much just use fountain pens—and like a proper fountain pen enthusiast, hiss at the very thought of being forced to use a ballpoint pen—I love anything Leuchtturm and immediately had to have it. I was anguished to learn that the Drehgriffel would not be available in the States for a while, so went straight to Cult Pens in the UK. Thrilled to see that they had the Drehgriffel in stock, I took a few minutes to consider what color I preferred, grabbed a few other things I’d been wanting, and placed an order.
Three long weeks later it was here, and though merely a ballpoint, I’m in love. 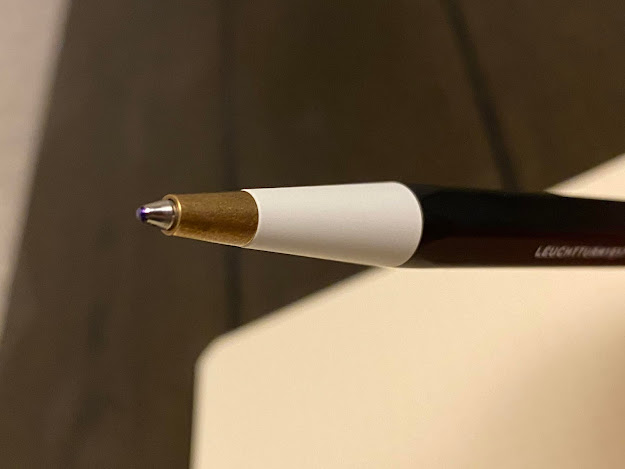 The Drehgriffel is a clipless aluminum and brass pen with a white twist mechanism at the top. Its smoothly hexagonal body negates the need of a clip so it will not roll off your desk, as most suicidal pens are wont to do. It is available in a wide array of vibrant colors, all which match various notebooks Leuchtturm produces: black, denim, Nordic blue, sage, red, Bellini, powder pink, lemon, and white. I did consider the yellow version before ultimately settling on black, because I liked how it resembled a woodcase pencil, but I own literally nothing that is yellow so it likely wouldn’t fit into my little collection as well. 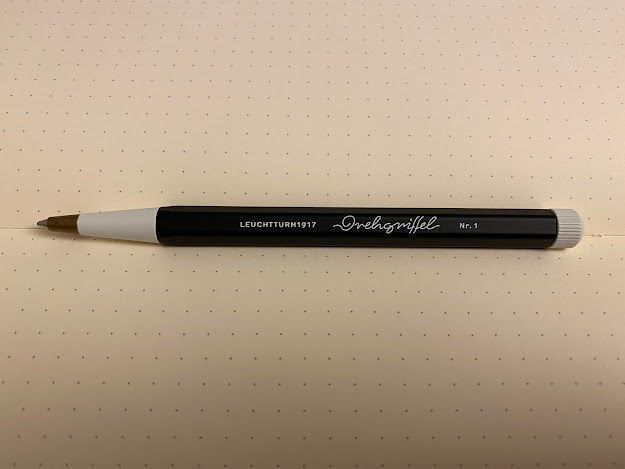 I am happy I went with black. I love the contrast of the black and white with the brass tip, and especially the white writing on the black body. As for the unique design, I would describe the Drehgriffel as modern vintage. The Cult Pens description styled it, “…distinctly retro; this is because it’s a revival of a writing instrument that was around in the 1920s.” And it certainly looks it. Despite its vintage appearance, it does not look out of place nestled amongst my other more modern pens. 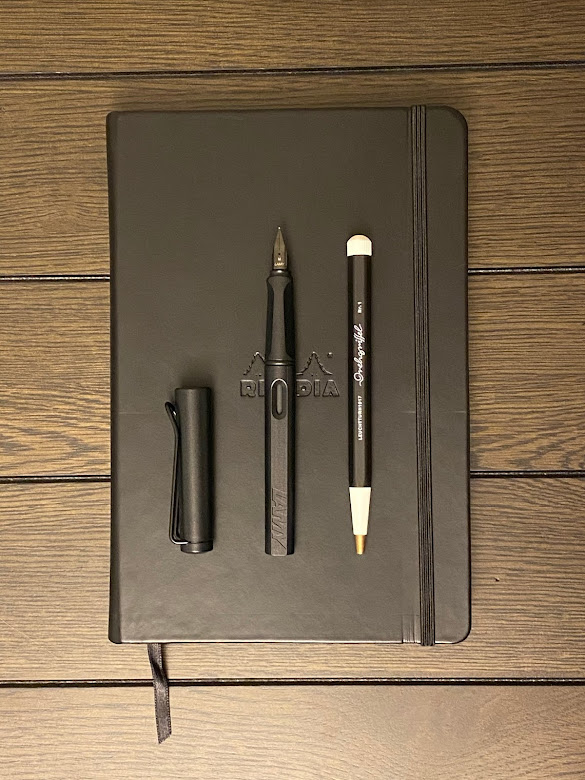 Lamy Safari All Black and Leuchtturm Drehgriffel ballpoint on Rhodia Webnotebook
Weighing in at 12g, it is light for a metal pen, though still feels very solid. I personally prefer lightweight pens, however, as it keeps my hand from tiring during long writing sessions. The Drehgriffel comes with a smooth blue ballpoint refill, which was sticky and skippy at first, but since worked itself out. 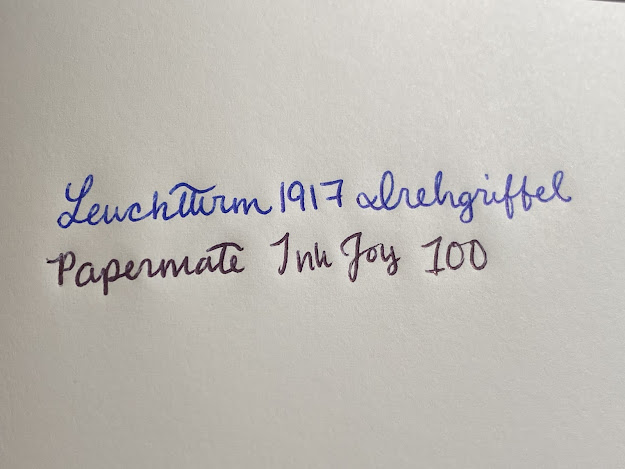 Leuchtturm Flow Blue refill compared to Papermate Inkjoy 100 ballpoint
The good thing about this pen is that the refills are not proprietary. It takes any Parker-style G2 refill, which really opens up your options if you don’t like ballpoints. I had actually initially ordered a couple of Parker-style G2 gel refills along with the Drehgriffel, anticipating not liking the included ballpoint refill and intending to switch them out immediately. I was pleasantly surprised by the smoothness of the Leuchtturm refill, however, and have decided to use up the included blue refill. 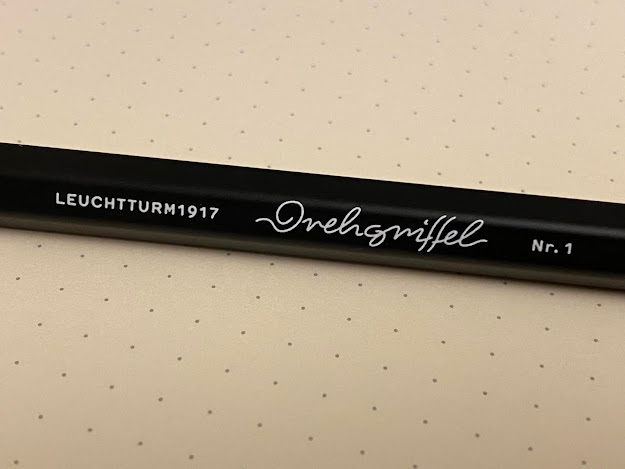 I purchased my Drehgriffel from Cult Pens, and after currency conversion, paid right at $20, so it’s by no means going to break the bank. And despite my earlier vitriol concerning ballpoints as a whole, this really is a wonderful little pen. If you’d like a nice metal ballpoint with a dash of retro flair, the Drehgriffel might be a nice addition to your collection.
Thanks for reading!!

Popular posts from this blog 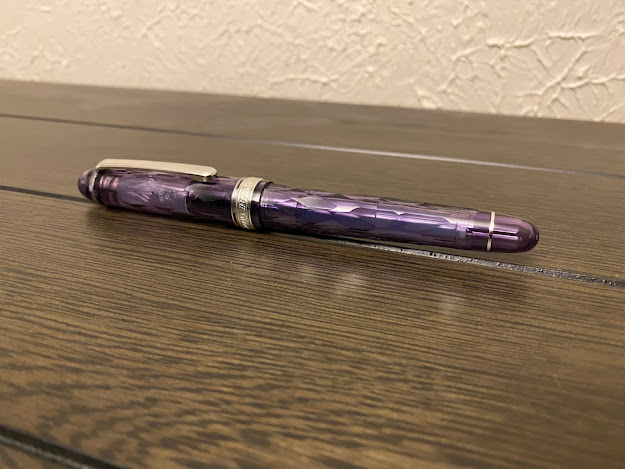 I’ll admit, I did not pay much attention to the Platinum 3776 Century Shiun when it was first announced. I liked the color and the design, but at $470? Nah. I contented myself with my humble Lamy Safaris and was able to ignore the gushing social media posts eagerly anticipating its release. But three days ago, not long after the Shiun was finally unleashed into the world, I spied with my little eye a video on Facebook: a woman turning the pen around and around in her fingers and showcasing its refractive beauty in the sunlight, and that was it. In a split second, I decided I had to have this pen. The way the light caught on the smooth, multi-faceted purple body, the beautiful, bright silver trim I had so easily dismissed before... I hastily did some research, as even I have criteria. My pens cannot be over a certain amount of weight, they must post, they must be able to take cartridges, blah blah blah. The Shiun met all the requirements. It didn’t help that at one point, I had almo
Read more 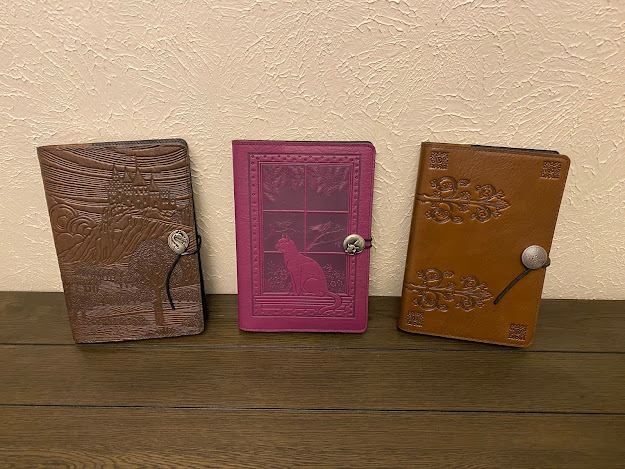 One of my favorite companies is Oberon Design, a family-owned leather workshop based out of Santa Rosa, California. They’ve been in business for decades and hand-produce a variety of products, including gorgeous journal covers, phone and tablet covers, bags and wallets, guitar straps and more, all using domestically-sourced leather, and also many types of pewter products like jewelry, charms, and hair accessories. Camelot in chocolate, Cat in Window in orchid, and Da Vinci in walnut   Before I get into the reviews of my own covers, I’ll quickly go over the specs. Oberon Design’s large journal covers measure 6”x9”, just slightly larger than A5 size. Though the covers include a heavy, hardbound insert which measures an inch thick by itself, it is possible to instead use a variety of A5 notebooks, including Leuchtturm, Rhodia, and the Seven Seas notebook, if you don’t mind a little bit of wiggle room. As a side note, I would not recommend the included sketchbook insert unless you use
Read more